The road between Marrakech and Merzouga via Ouarzazate is one of the most beautiful circuits to do by roadtrip in Morocco. Scattered with many points of interest, this route will take you on a journey through nature and time.
With mountains, palm groves, valleys, Kasbahs and villages with ancestral traditions, you will be totally dazzled by this circuit done by car. 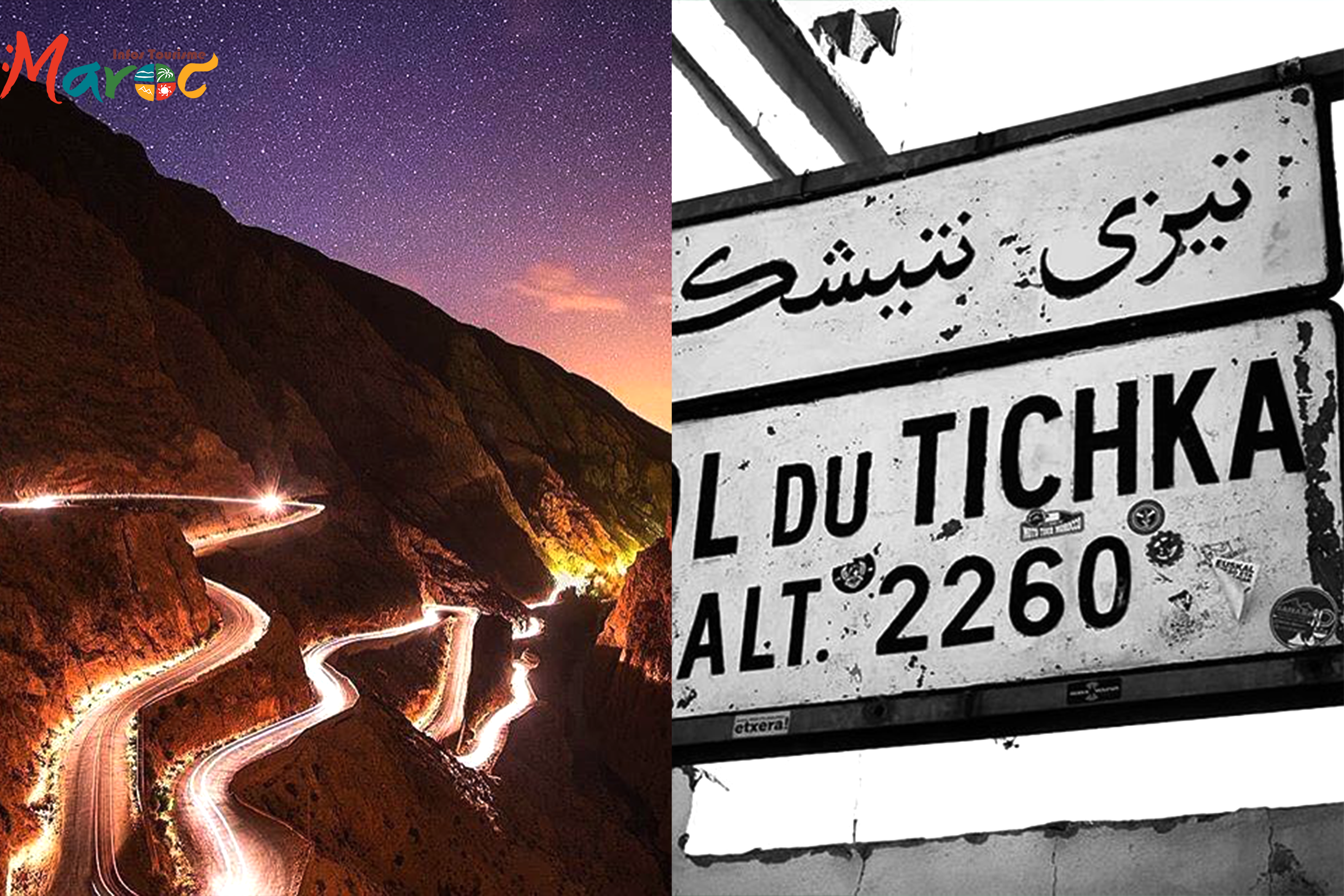 Between Marrakech and Ouarzazate, this dizzying road crosses the most beautiful landscapes of the High Atlas over nearly 200km. The nature and colours of the landscape change along the way. The Tizi n'Tichka region offers walkers a very surprising natural richness and many hiking possibilities.

Tizi-n-Tichka Pass. Mountainous barriers, Mediterranean and oceanic influences, desert borders. Morocco enjoys multiple climates so while temperatures remain mild at the seaside, the interior of the country is more subject to seasonal variations. 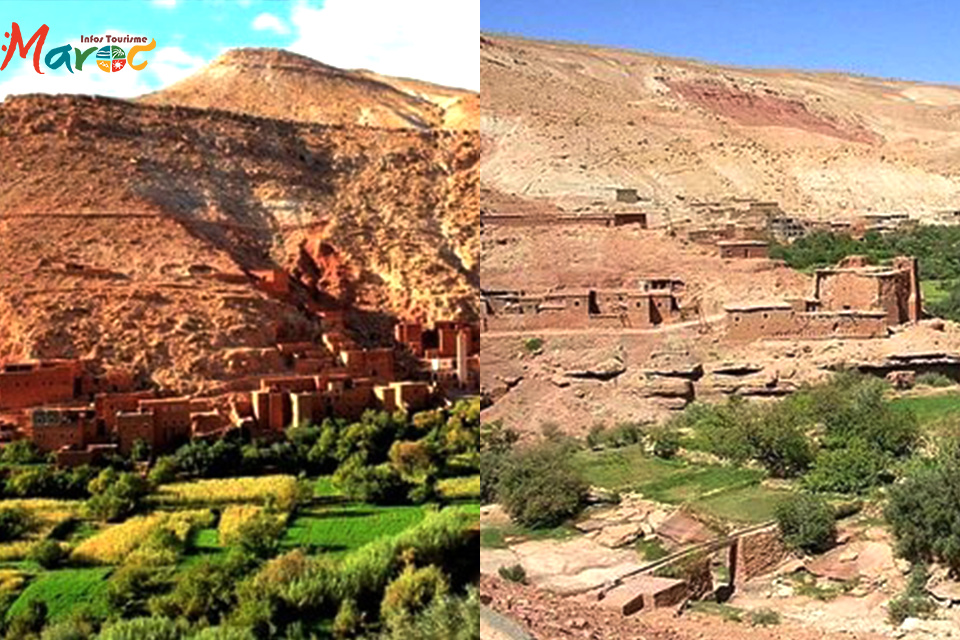 The Valley of Ounila, in the South of the High Atlas, offers a concentration of spectacular landscapes, dotted with Berber villages and Kasbahs and is included in the oases of southern Morocco that are considered World Heritage, thanks to the abundance of geological and mineral deposits found there.
It is inhabited by descendants of Berber tribes and stands out for its palm groves, springs, handicrafts and moussems. 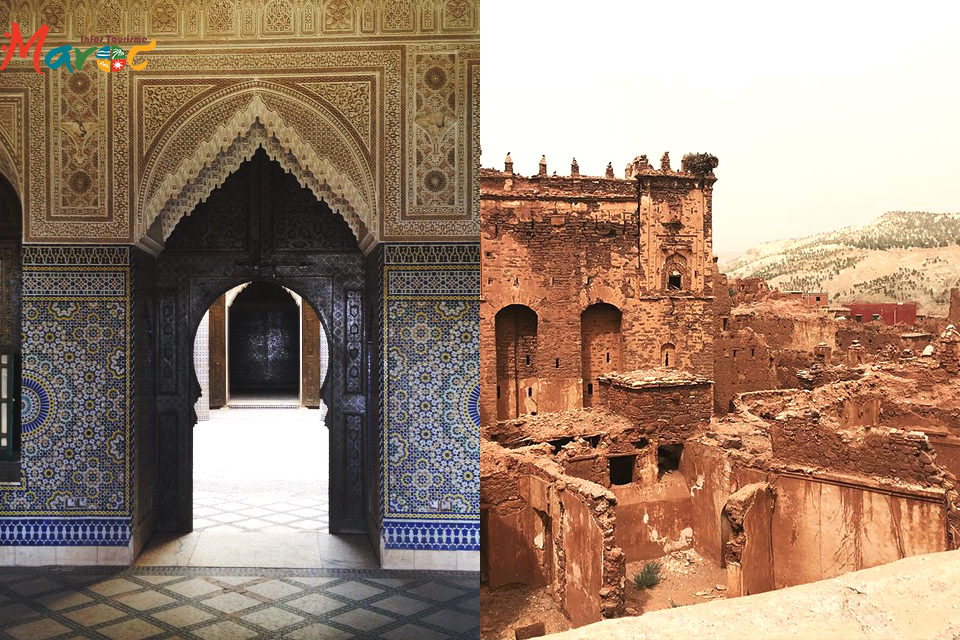 A Kasbah lost in the high valleys of the Atlas Mountains where time seems to have stood still for more than half a century. To wind the clock, you have to rush into the shadows of its thick walls where the ghostly memories of the last Lords of the Atlas Mountains slumber.
Their awakenings propel the traveller between enchantment and disenchantment. For culture and stone lovers, beware!
An imposing solid wood door opens onto a paved courtyard surmounted by a balcony that used to serve as a courtyard of honour.
The Kasbah guide recounts that Winston Churchill and Ernest Hemingway attended folklore performances here. 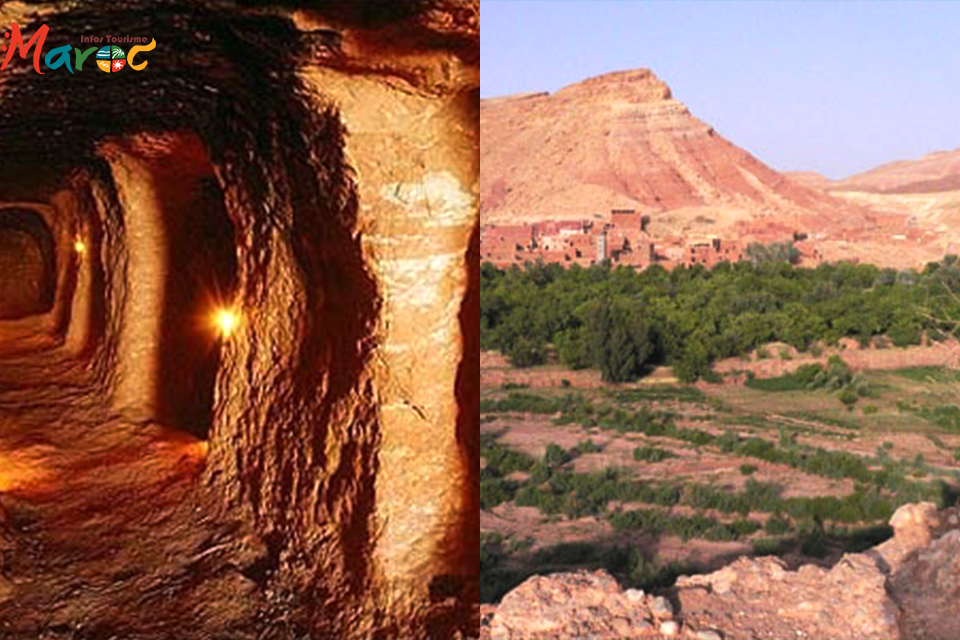 Before permanent settlement, the region was inhabited by semi-nomads. They have left few traces of their occupation, except for the presence of several cliff granaries along the Assif Marghane. These are a series of aligned cells cut into the rock. Access to the granaries is extremely difficult. One of these cliff granaries is still accessible via a dangerous goat path. It has some 60 cells divided into three galleries on two levels. 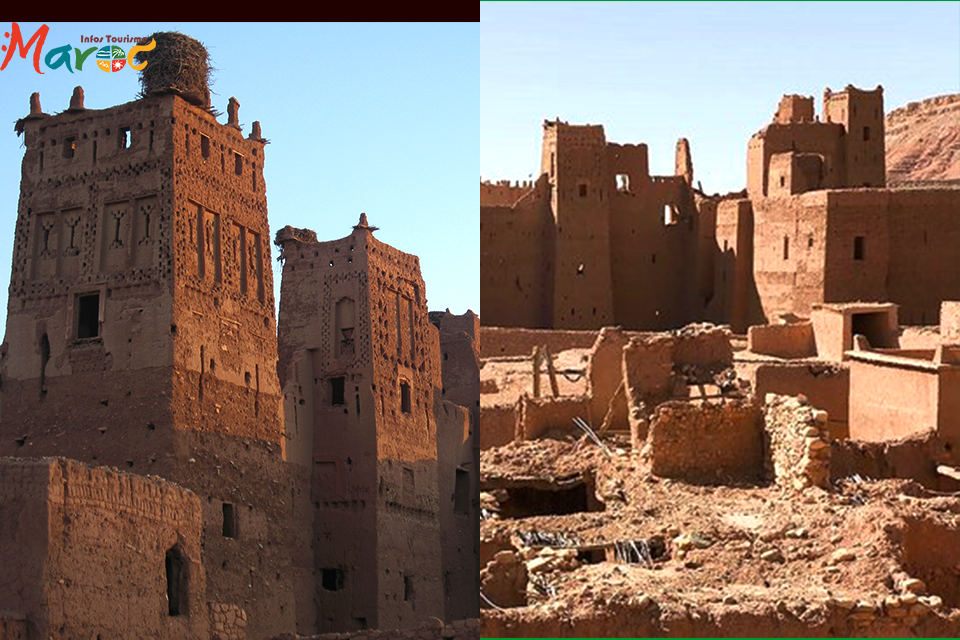 The Kasbah of Tamdaght is located in a site of breath-taking beauty. You can visit the citadel and its gardens for a small fee. It can be seen as an isolated structure from afar on the plain.
The entire Kasbah cannot be visited, but you can walk through the narrow streets of the small village and admire the panorama. 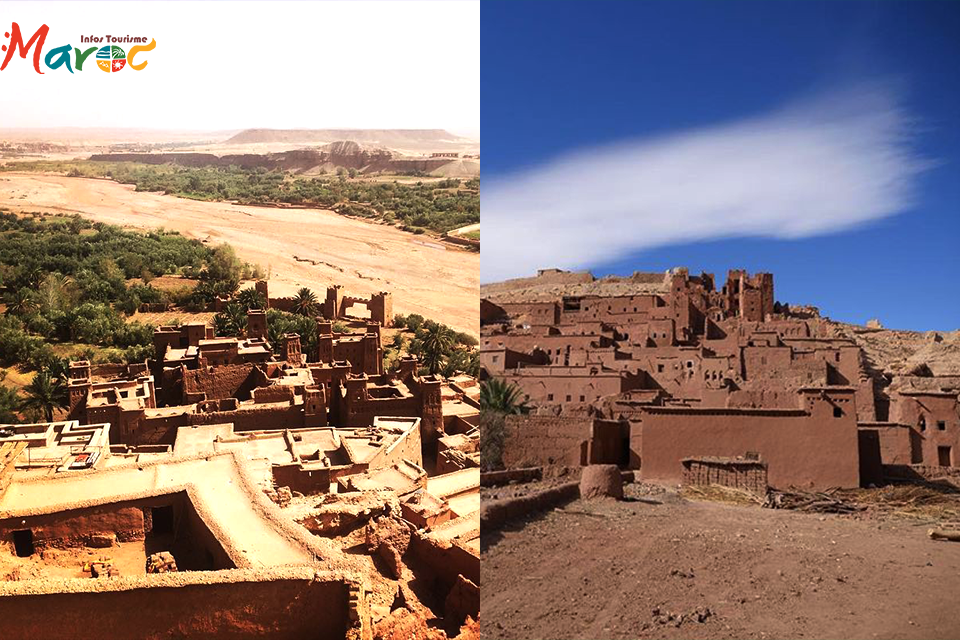 The Ksar Ait Ben Haddou is nicknamed the Mont Saint Michel des Chleuhs, the Berber people of southwest Morocco.
Located 30 kilometres north of Ouarzazate, the Ksar of Ait Ben Haddou has been a UNESCO World Heritage Site since 1987.
A group of earthen buildings surrounded by high walls, it is a traditional pre-Saharan habitat. The houses gather in the defensive walls, reinforced by corner towers. Ait-Ben-Haddou, in the province of Ouarzazate, is a striking example of the architecture of southern Morocco. 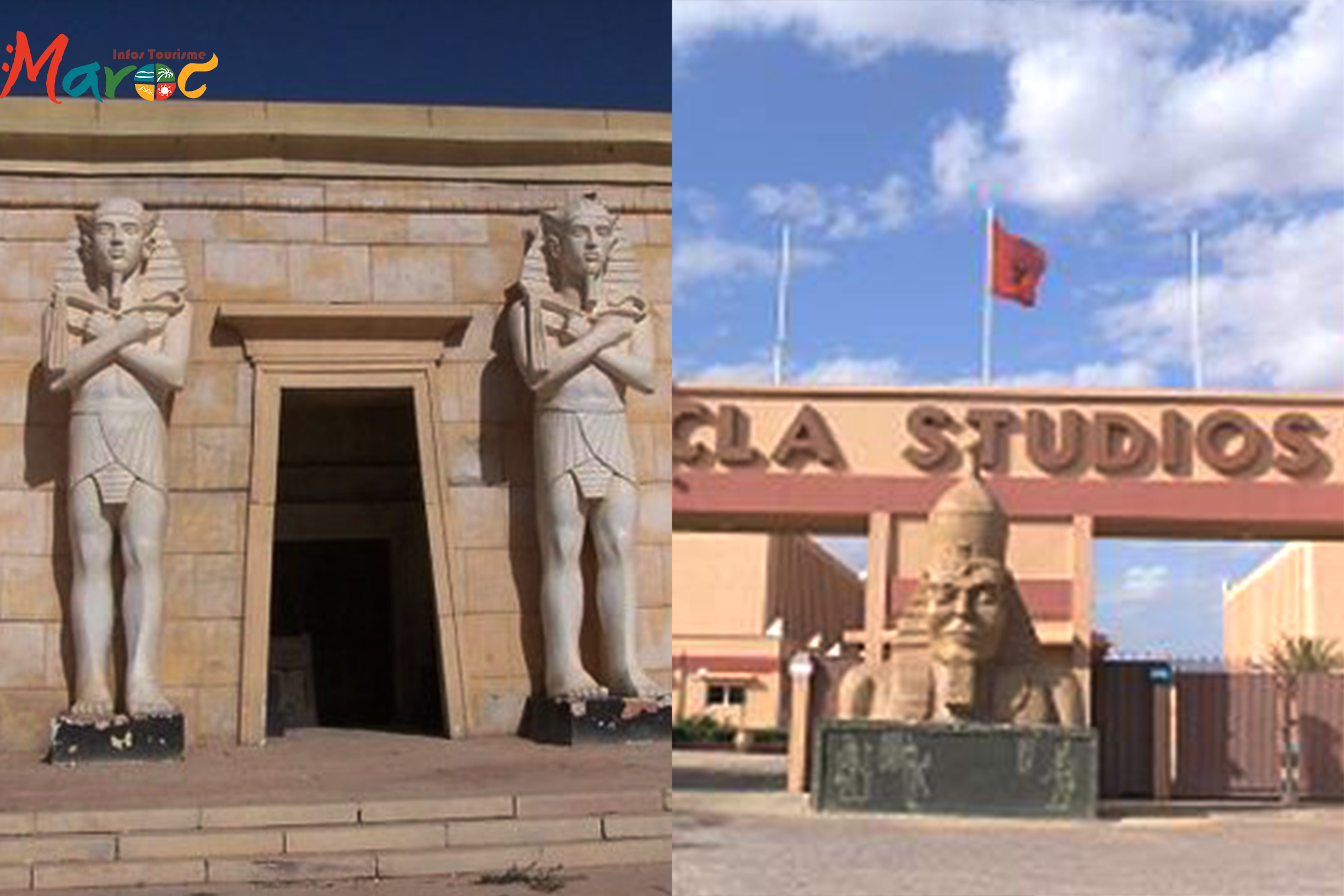 Since the 1960s, the Ouarzazate region has been highly prized by filmmakers. The differing landscapes, the ethnic diversity, the exceptional light, the availability of local labour, all these elements make Ouarzazate one of the most desired places in Morocco by filmmakers.
3 major film studios are located in Ouarzazate, Kanzaman, Atlas Studios and CLA Studios welcome visitors who want to immerse themselves in the sets of their favourite films. 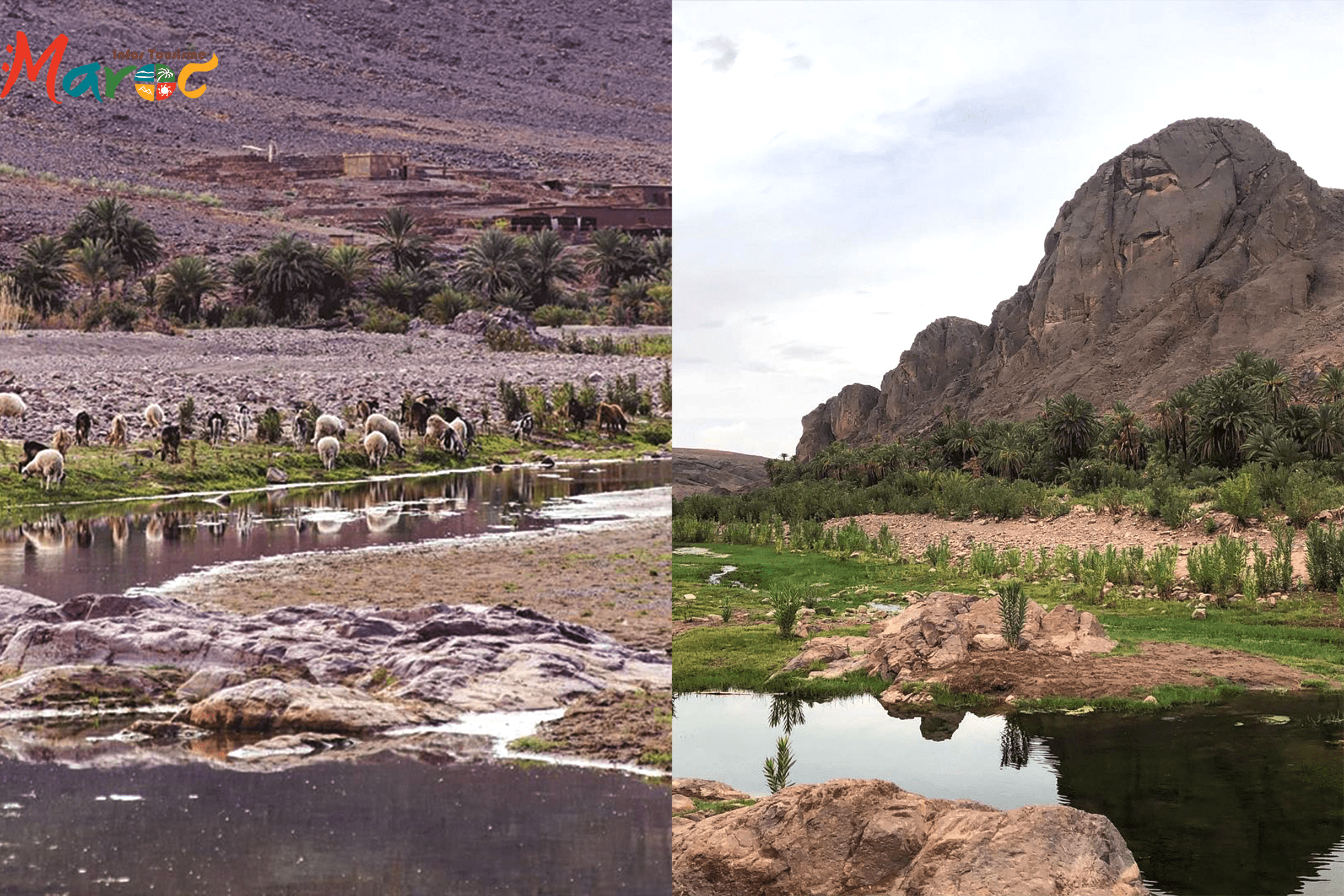 Do you dream of discovering other horizons, far from mass tourism, of living the country in all its intensity differently, of sharing unforgettable moments together with your family or friends, of contemplating grandiose landscapes, of getting to know or getting to know Morocco and its customs, its legendary hospitality, its culinary delights?
About fifteen kilometres from Ouarzazate is the legendary Oasis of Fint.
Don't hesitate to visit us at the Fint Oasis, let yourself be guided by the spirit of discovery of man and nature. Wonderful moments await you in this little world hiding secrets of real rural life. 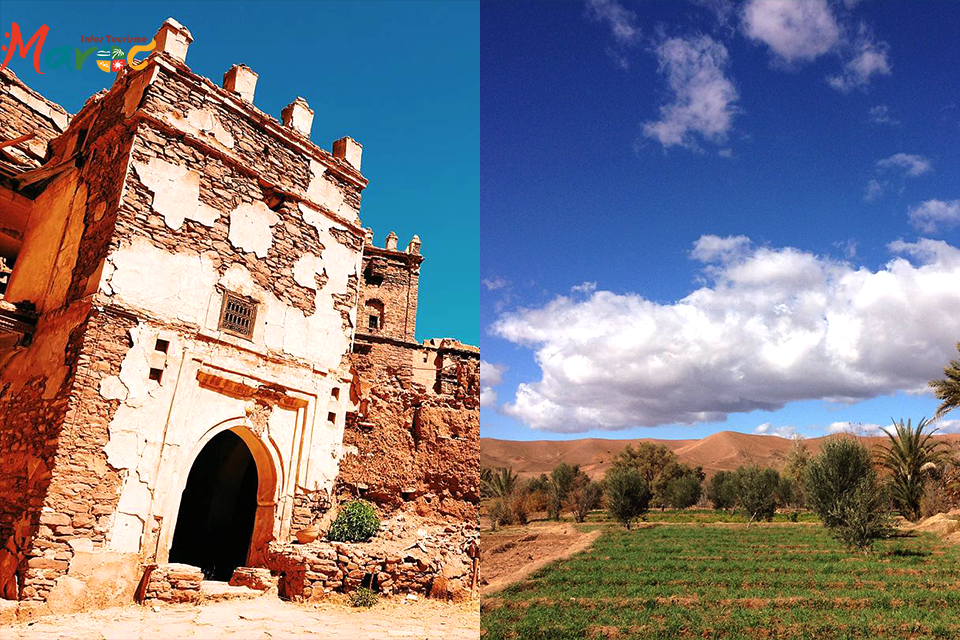 The Kasbah of Skoura is a fortified complex, built with local materials and perfectly adapted to the climate. These are majestic fortresses of red or ochre earth, which look like mud castles, usually isolated but located high up with a watchtower to watch over the valleys below. 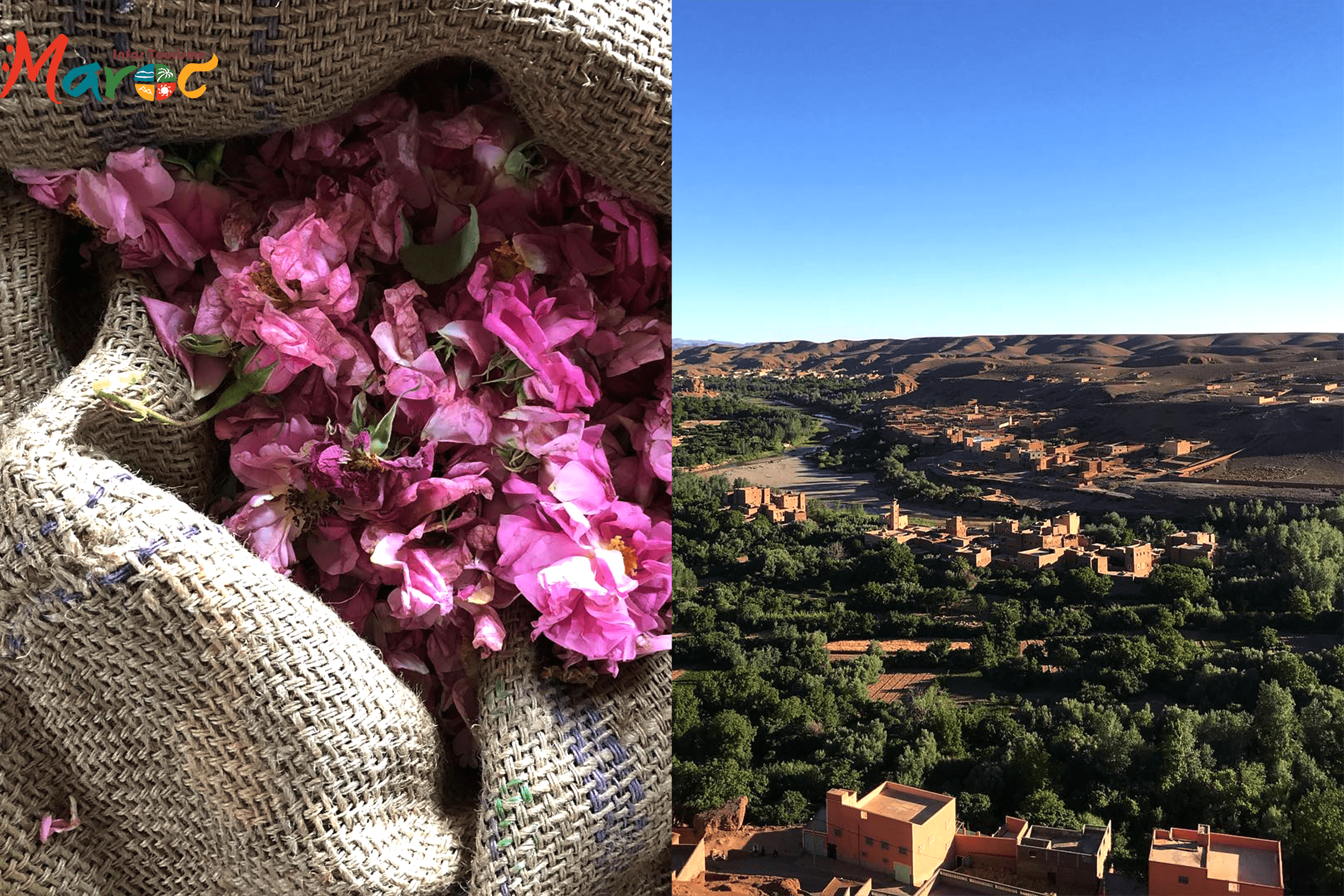 The Valley of the Roses is located at the foot of the Moroccan High Atlas, at the junction with the Dades Valley. It is irrigated by the Asif M'Goun River and Kelaat M'Gouna is the main access. It could also be called "Pink Valley" because of the colour of its land. 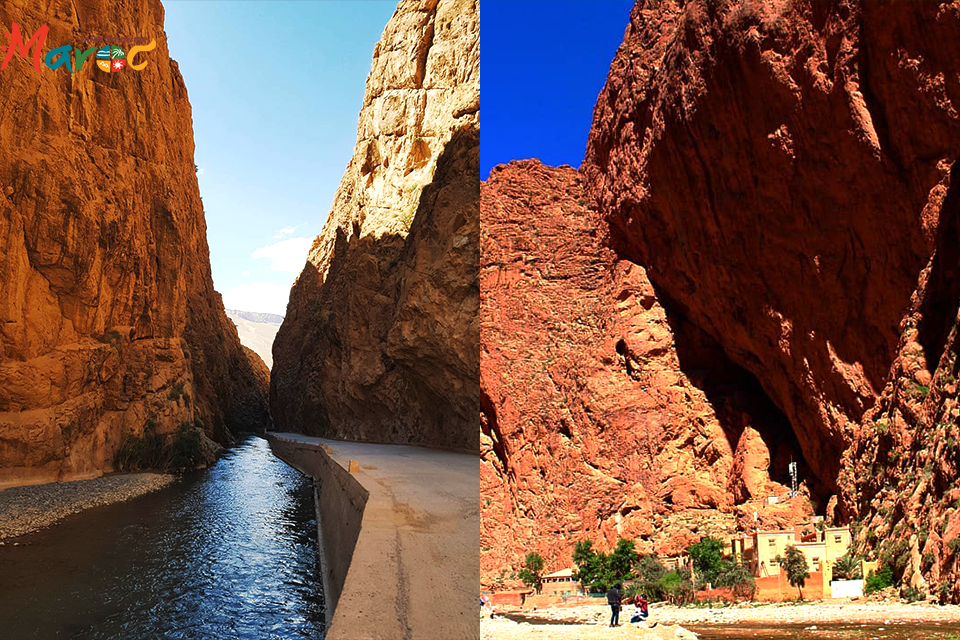 The valley of the Dades gorge, 25 km long, is one of the most interesting in southern Morocco. The landscapes are splendid, the dwellings merge with the rock and the Dades River flows gently down from the high limestone plateaus. 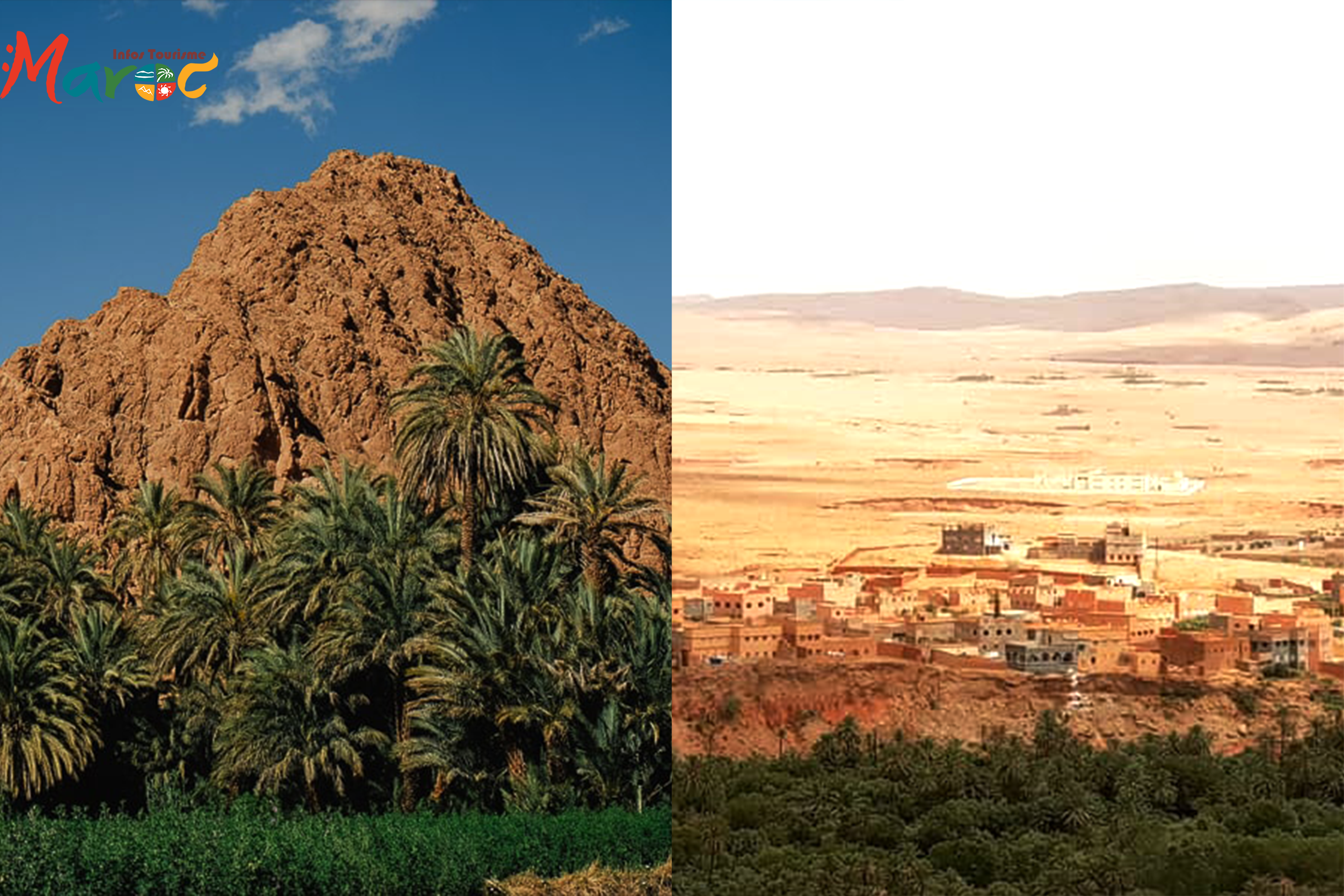 The palm grove stretching from the Todra gorges to the south-east of Tinghir over some thirty kilometres presents varied faces, sometimes bordered by cliffs on which stand ancient mud villages, either inhabited or partially in ruins, olive groves and date palms interspersed with cereal plots. 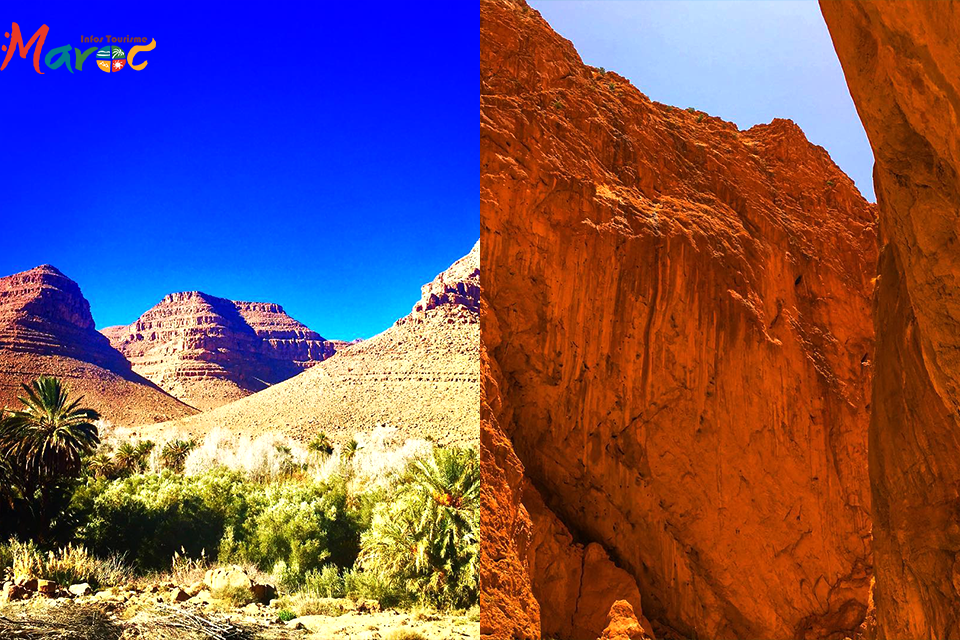 160km from Erfoud, the valley of the Todra river begins over a length of 50km. The valley is surrounded by a mountainous landscape worthy of American westerns or Sergio Leone.
The road winds through the sierras overlooking the magnificent oasis of the Todra river. Palm trees surround the market gardens and the wheat and barley fields.
The cliffs are 300m high. A hostel offers food, drink and accommodation. Many hardy men and women stay here to climb the rock faces. 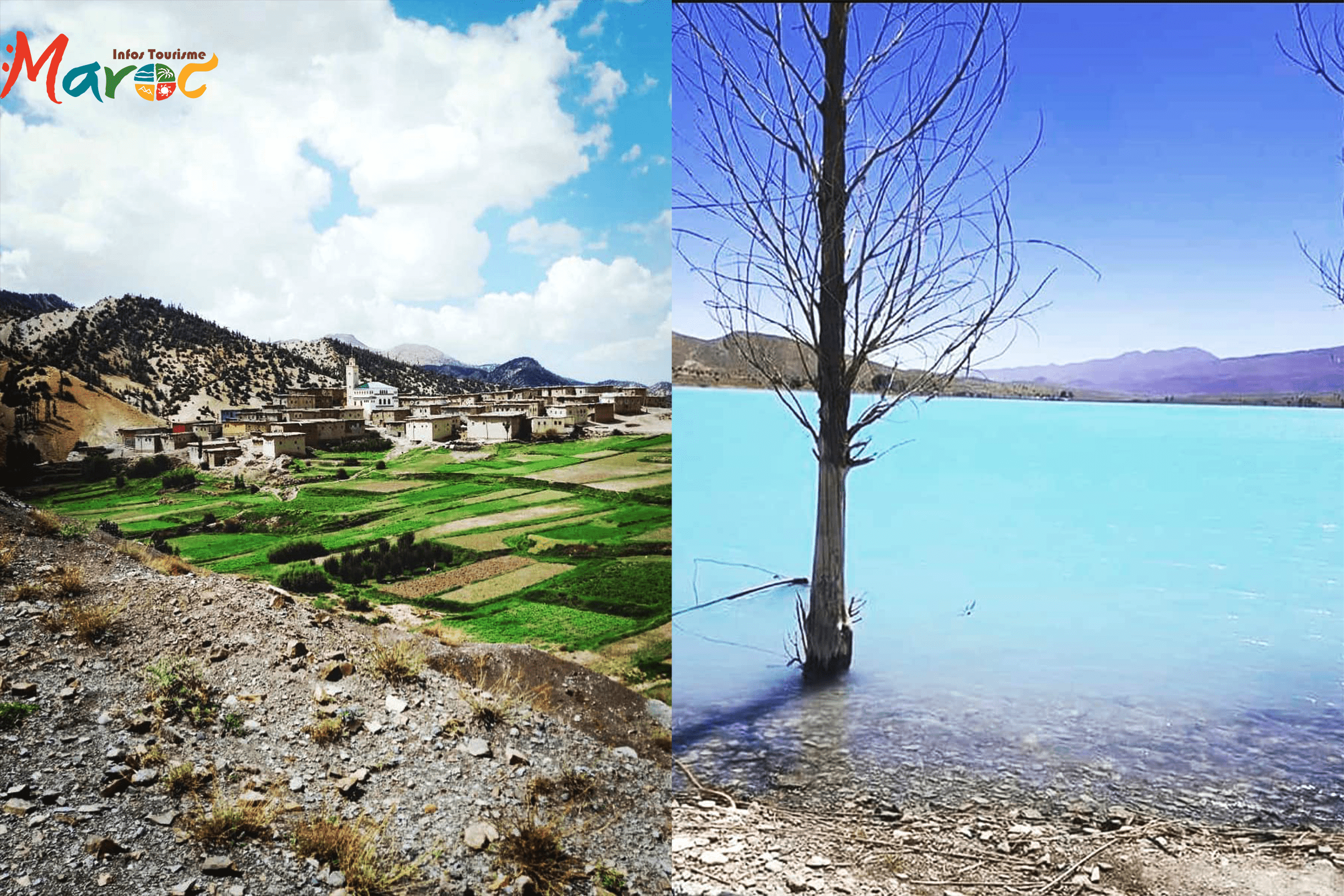 The region of Imilchil is a mountain valley in the northern part of the Moroccan High Atlas located at an average altitude of 2,300 meters,
The Imilchil region has become relatively more accessible than before as a result of the construction of asphalt roads towards Khenifra or Beni Mellal via Aghbala in the north and towards Errachidia via Rich in the east.
The link road to Tinghir with the southern slope of the High Atlas Mountains is almost finished. The one in the direction of Midelt by Cirque de Jaafar is still not asphalted.
The language spoken by the inhabitants of Imilchil and in the whole valley in general is Tamazight, Arabic is the official language taught in schools and used in local government and administration as well as some commercial situations. 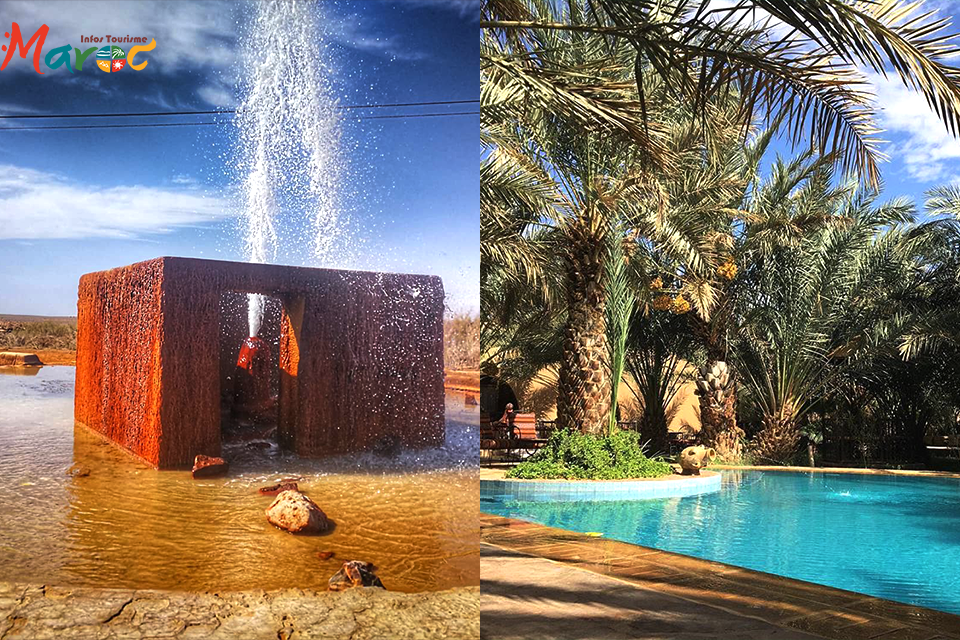 In the heart of the desert, this charming little village sleeps at the foot of the High Atlas, on the road of the thousand Kasbahs. The site of Erfoud is an ideal starting point to explore the Moroccan desert, where you will discover extraordinary landscapes!
Erfoud has an important souk and market, next to the central square which forms the centre of the town right near the river. 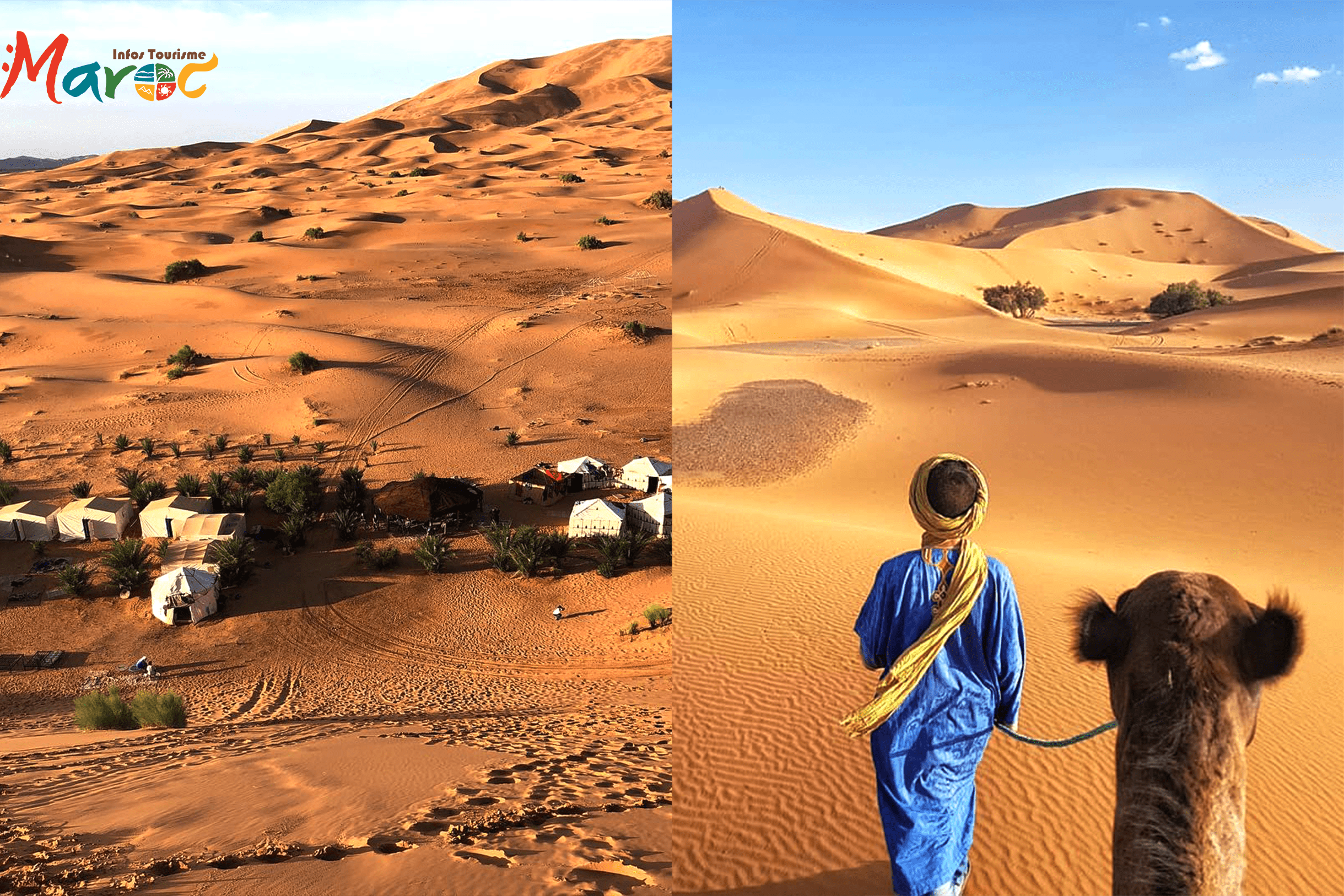 The dunes next to the village of Merzouga are nestled in the Moroccan desert. Merzouga is famous for its huge sand dunes. The region is Draa-Tafilalet in the province of Errachidia.
Many activities are available. Camel riding, quad biking on the dunes, nights under the starry sky, hiking in the desert to admire the beauty and the changing colour of the dunes. No doubt, if you like adventure, Merzouga is the perfect place. 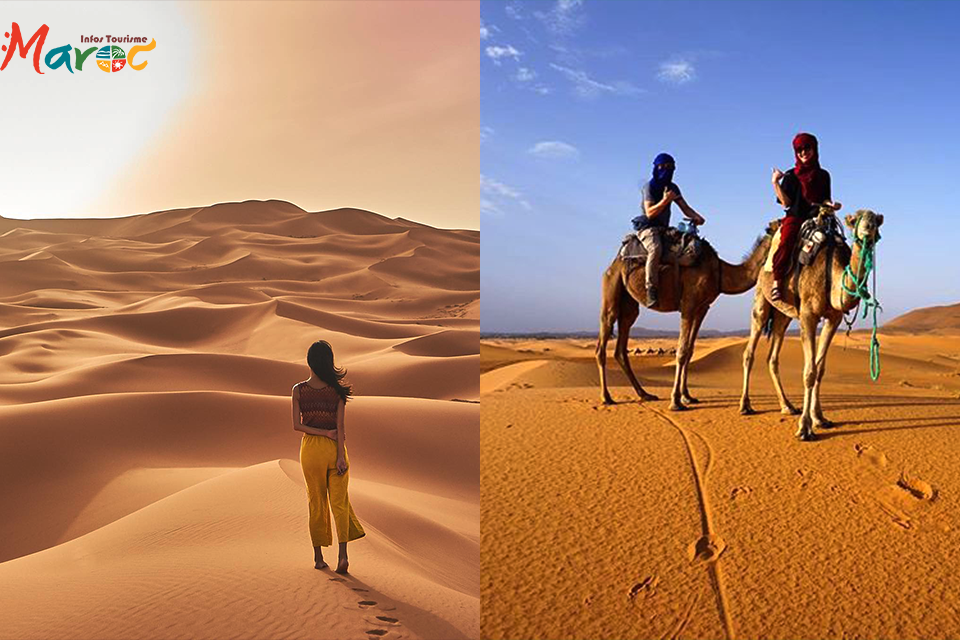 The Erg Chebbi is a magnificent and unforgettable set of dunes with orange ochre colours. An erg is formed in a bowl by the accumulation of debris that has been transported by the rivers.
Going around Erg Chebbi will allow you to best appreciate this big pile of sand 27km long and 7km wide. But beware, you risk being drowned in a wave of tourists, especially at sunset.