Moroccan cuisine is very varied and rich in flavours and fragrant, sometimes quite spicy. The cuisine owes its taste to the spices. They are used both in bakeries and pharmacies as preventive care.
Many other medicinal uses in herbal tea with honey, directly on the skin, are natural remedies that are still in use today. 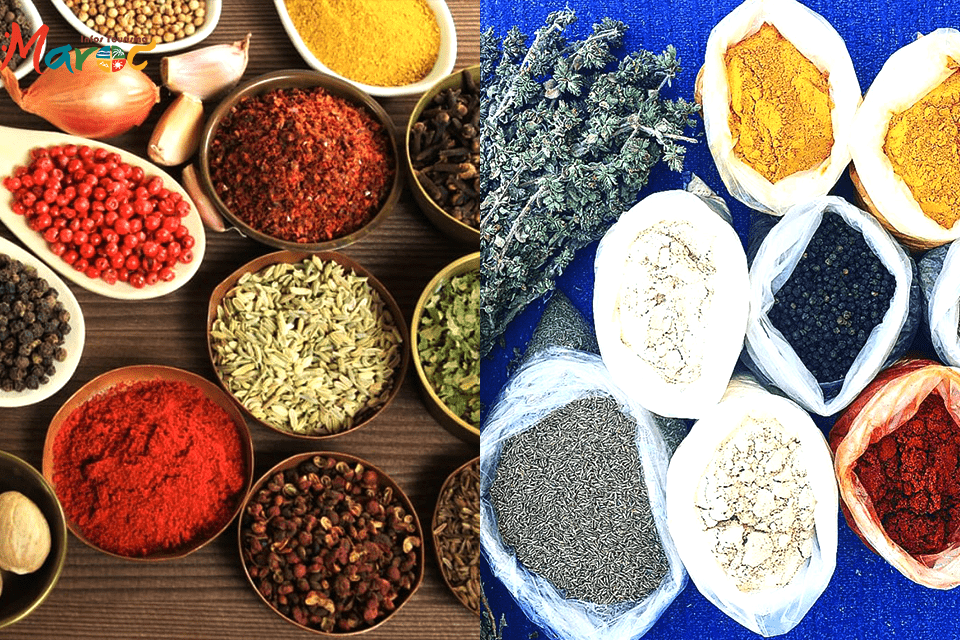 These are a set of ground and mixed spices that make up Ras El Hanout. Ras El Hanout is used in the preparation of the Mrouzia tagine. All these spices are obviously washed, dried and ground. They can be found for sale in all the spice souks, either already ground or raw.

Originating from the north of the Asian continent, Garlic blends perfectly with Moroccan cuisine. It enhances the taste of the dishes. It is considered a poor people's antibiotic and good for the blood.

The almond is very present in Moroccan cuisine as well as in many pastry recipes. Almond juice is served on the day of important ceremonies.

Native to the Mediterranean basin, it flavours fish very well. To preserve its aroma, it should preferably be used fresh, without cooking.

It is used in the composition of gingerbread and many traditional pastries, with a pronounced taste.

Slightly peppery and used alone in cream sauces, they are also decorative, ideal for fish.

It has conquered Moroccan cuisine and is used in the composition of many dishes. For hot dishes it should be added just before serving to keep its lively and fresh flavour.

Inseparable from the apple, it is also perfect for stewed meats. Cinnamon has the recognised quality of relieving gas and colic while stimulating the appetite and is an anti-oxidant. The pastry shop also uses it a lot for its tangy flavour.

Capers are flower buds that have not yet bloomed. The smaller it is, the more delicate its flavour and pronounced aroma. Morocco is one of the main exporters. Widely used with fish or offal but not all the time.

Indian spice par excellence, it goes wonderfully with lamb, aubergines and many others.

This delicate Chinese blend, very fragrant, composed of Szechuan pepper, cumin, star anise, ginger and nutmeg, is perfect with dark and robust meats such as duck.

This spice has a tenacious, pungent, pungent flavour and perfectly enhances the taste of the other spices associated with it. Ideal for cooking fish and rice.

Coriander seeds are small (a few millimetres in diameter), hollow, light brown to beige in colour. Their taste is different from that of the leaves. They are usually used dried. Crushed with garlic and pepper, they are a basic condiment. Inseparable from the so-called "Greek-style" preparations and gherkins.

Widely used in North African cuisine, cumin traditionally enhances couscous, tagines and merguez with its slightly aniseed flavour. This spice is regularly imported from Morocco. A must for Moroccans, it is also very good for health.

This spice is often confused with saffron because, like saffron, it is a highly concentrated yellow-orange colouring agent. It is slightly pungent and bitter. It is at the origin of the industrial yellow food colouring and is allegedly an anti-oxidant and anti-cancer agent.

Fresh, it is refreshingly hot and peppery; grate it or squeeze it to extract the juice. Dried and powdered, it loses some of its strength but remains interesting in many preparations. It goes well with both sweet and salty. It has an anti-inflammatory action and burns fat.

It has its place in every stew. The whole clove is more potent than the powder and the heads are stronger than the extension.

This is a specialty of North Africa and the Middle East. It is made up of garlic, chillies, coriander and cumin, all crushed together.

These leaves are used in cooking for their aroma. They can be used dried and infused or cooked in the sauce. Laurel/bay leaves are also used to treat abdominal cramps in an infusion. In cupboards, it scares the cockroaches away.

Mint goes well with mutton, cucumber, pulses, tomatoes and is indispensable with North African tabbouleh. It is the main ingredient in the composition of Moroccan tea. There are several varieties with different tastes, from stronger to weaker.

Nutmeg can be used with both salty and sweet dishes. It flavours sauces and fish but also some oriental pastries and desserts.

More or less long, more or less spicy, green, red or yellow, they can be used fresh, dry or dry and powdered. The hotter the climate of a country, the hotter the peppers cultivated and the more they are consumed because of their sweat-inducing virtues. The smaller the peppers are, the more aggressive they are: bird tongues, chilis. Use powders sparingly.

Grey, white, black, its perfume differs slightly according to its colour which depends on the tree that produces it and/or the maturity of the seed. You can make your own mixture, adding a little coriander and allspice. Avoid powdered pepper, which loses its fragrance too quickly. A real pepper deserves its own special mill.

This is the seed that has not yet reached maturity, preserved in brine or freeze-dried.

Product of Morocco originally composed of at least 37 spices including cardamom, nutmeg, pepper, pepper, rosebuds, iris flower, etc. Very fragrant but very mild, it is inseparable from a good couscous broth and is used in tagines and many poached dishes.

The most expensive spice in the world is sold in small doses and is used sparingly. It is found in the form of dried filaments or powder. As soon as a recipe mentions saffron in teaspoonfuls, it is turmeric and not real saffron.

Mixture of chilli peppers and very strong vinegar. As a liquid, it mixes better than powder in some preparations.

The one from Reunion Island (Bourbon vanilla) is the best. Use it in savoury sauces, its fragrance is pleasantly surprising.

Use of spices in Moroccan cuisine:

Moroccan and Maghreb cuisine is very fragrant, sometimes quite spicy and strong, sometimes sweeter, depending on taste and region.

Let'sl try to find out more about the use of spices in Moroccan cuisine.

It exists in two forms, powder or filaments. The powder is used for braised meats and filaments for rice and soups. It gives the dishes a typical and much appreciated flavour and colour.

White pepper is stronger when it is not cooked. Also, it is recommended to add it at the end of cooking. It is often used with ginger for all-purpose preparations.
Black pepper is used more often, especially with nutmeg.

This is widely used, especially when it is powdered. It should not be overcooked, but rather added at the end of cooking, if you want to preserve a certain bitterness. But this bitterness nevertheless has its followers.

It is used in simmered preparations, again often at the end of cooking and moderately, because it can be quite strong and bitter.

It is a spice very appreciated in Morocco and the Maghreb. It is used for both sweet and savoury dishes.

Mild or strong paprika, depending on taste, colours and spices up the preparations.

Nutmeg should be used sparingly. It is often associated with paprika or ginger.

This is very popular in the cuisine of the Maghreb. There is wild mint, known as fliou, commonly used in herbal teas and tagines, and naa-naa which is a spearmint used fresh or dried. Fresh, it is used in the preparation of mint tea and dry, is used in the composition of many dishes or salads.

It is widely used in soups, soups, ground meatballs and tagines. Favour fresh coriander, which has a much more delicate flavour than its dry or seeded variant.

The parsley known in the Maghreb cuisine is flat parsley and is more tender and more fragrant than curly parsley.

Orange blossom water is used in the composition of many desserts and some simmered dishes. Don't cook it, it will lose its flavour.