A country of sea, mountains and desert, Morocco is a true paradise for hikers. The kingdom abounds in hiking circuits and itineraries for all tastes and levels.
Morocco benefits from such a great variety of landscapes and natural sites of exceptional beauty. Infos Tourisme Maroc invites you to discover the most beautiful lakes of Morocco. 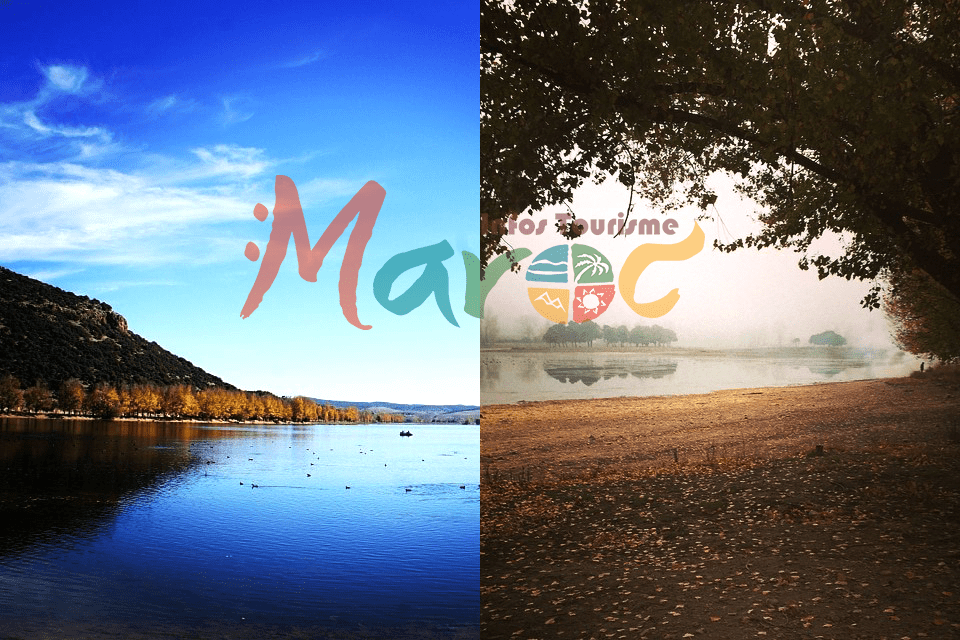 The Daït Aoua is the most famous lake of Morocco and is located 15 kilometres north of Ifrane on the road to Fez at an altitude of 1,460m. Its surface area of 140km2 varies according to the seasons.
Its depth remains shallow, four to five metres upstream (west) and a shallow silted, marshy-looking part to the east.
The lake is surrounded by a wet meadow and forest massifs of holm oaks and cedars. A belt of poplars and a few feet of willows surround the lake on its immediate shores. The underwater and above water flora is abundant and very diverse. 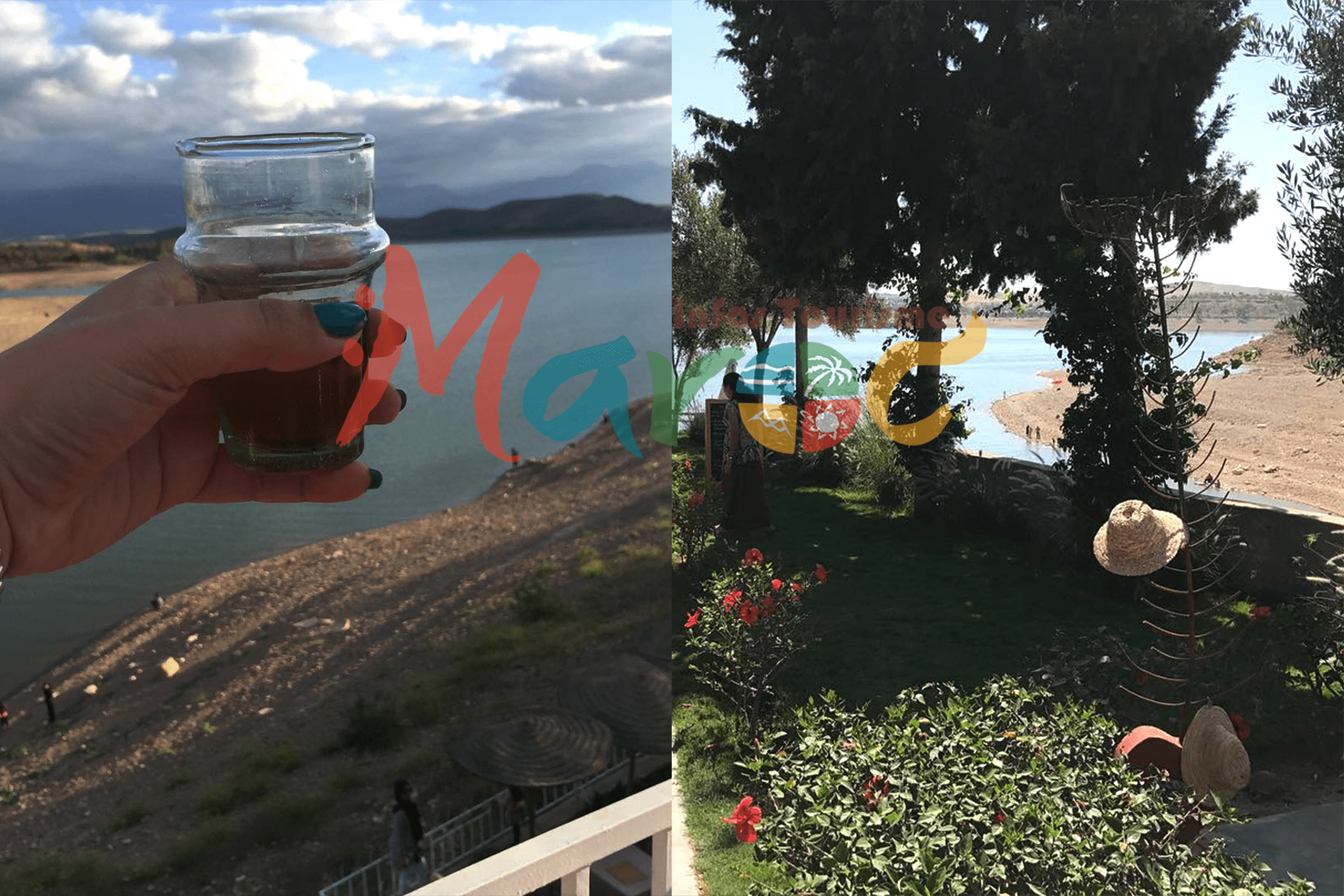 A dam located 40 km south of Marrakech, where it's good to get away for a few days, to connect with yourself and fill up with energy for the New Year!
Lalla Takerkoust seemed to us to be a good option for such a reflection. Rightly so - it was the second time I stayed there, and the impression was the same, a real haven of peace ! 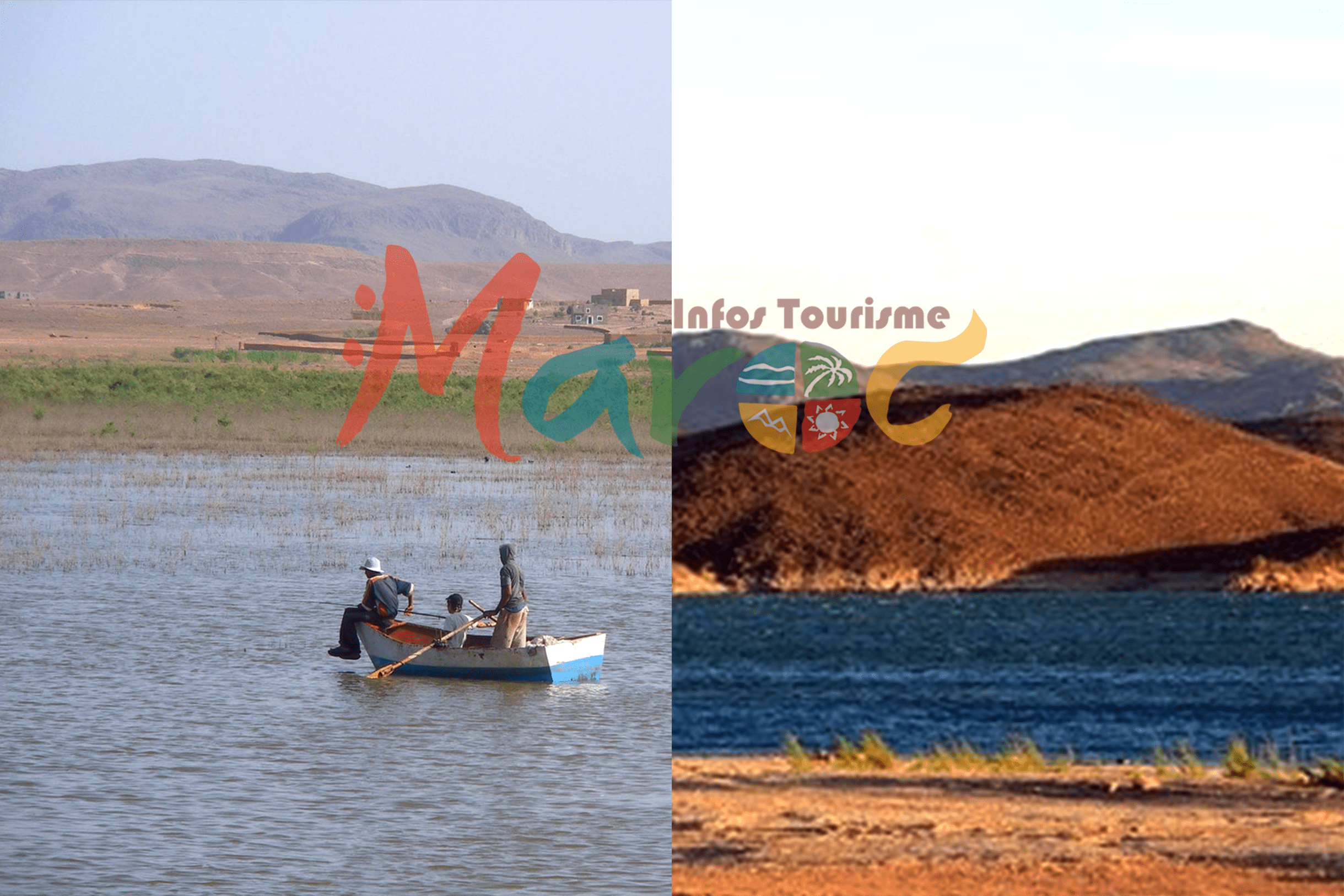 The reservoir of El Mansour Ad-Dahbi dams is located downstream of the confluence of two rivers and six oases with irrigated palm plantations along the course of the river Drâa.
More than 80 species of birds winter or nest in the dam’s area. The site is an important refuge for migratory species, especially sparrows on the Trans-Saharan itinerary which use this site to land before and after crossing the desert. 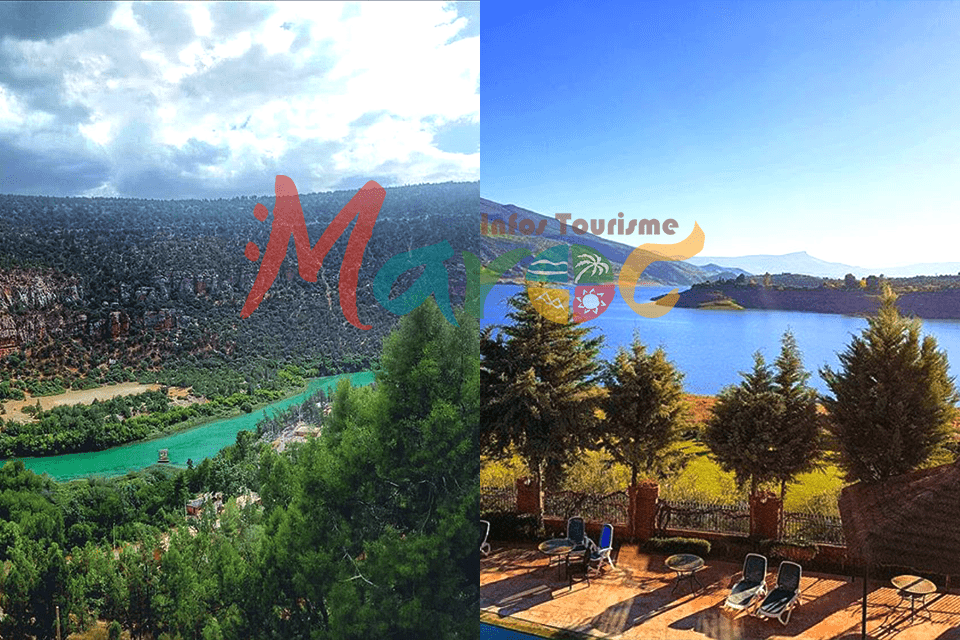 There is a lake in the centre of the Atlas between the El Abid river and the Ahanesal Massif, whose crystalline waters reflect all the beauty of Nature: Bin el Ouidane, these three words literally mean "between the rivers".
A dam was built on the Bin-el-Ouidane river, forming a reservoir of 3,755 ha which brightens up the surrounding mountainous landscape. 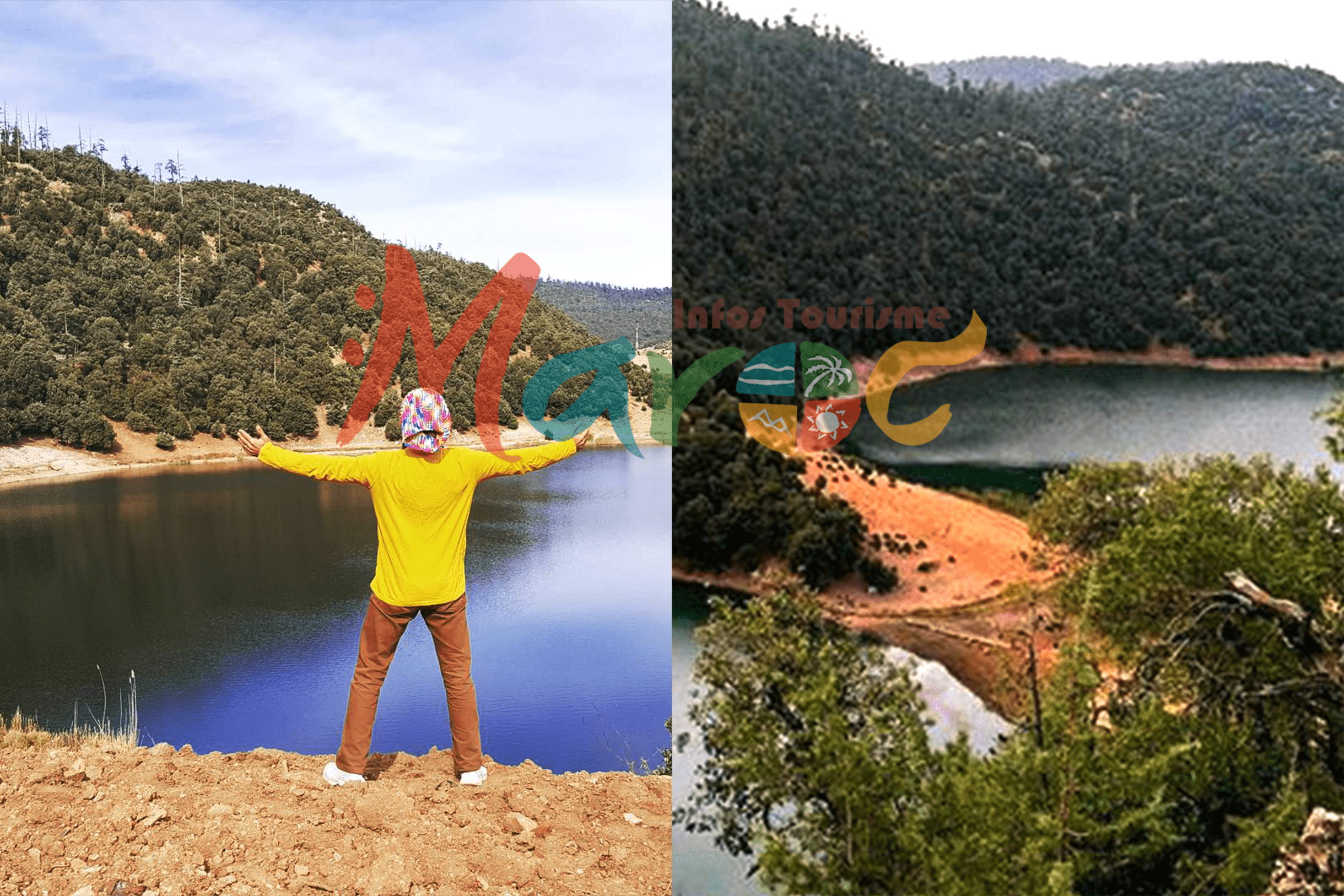 Lake Tiguelmamine is located in the heart of the Middle Atlas, 40 kilometres from the city of Khenifra.
Classified as a national heritage site, this natural body of water is located in the middle of a vast flat-bottomed depression covered with basalt and fine deposits. The tranquillity and purity of the site make it a perfect place to enjoy nature, whether alone or accompanied, in its purest state. 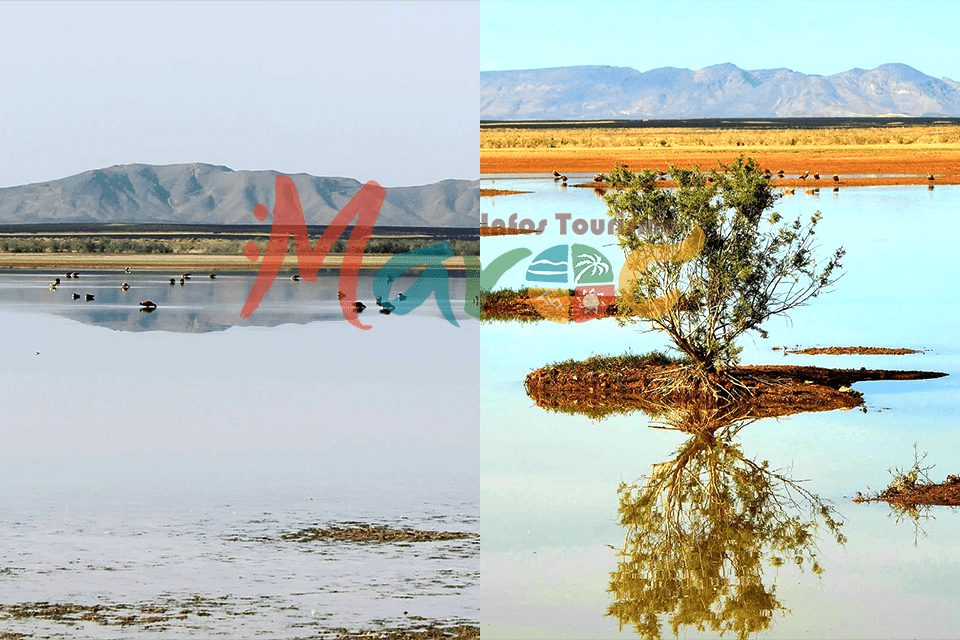 Renowned for its wide biodiversity, Lake Dayet Sirj overlooked by Erg Chebbi, offers an exceptional panorama of a multitude of bird species including majestic pink flamingos between November and May.
The Dayet Sirj Lake is located 4 kilometres from Merzouga and is also used for irrigation of crops from the lower part of the lake. It is dry in summer but after the autumn rains it is full of water.
From the lake at sunset, lovers of photography will be delighted with the sand dunes of Merzouga as a backdrop. 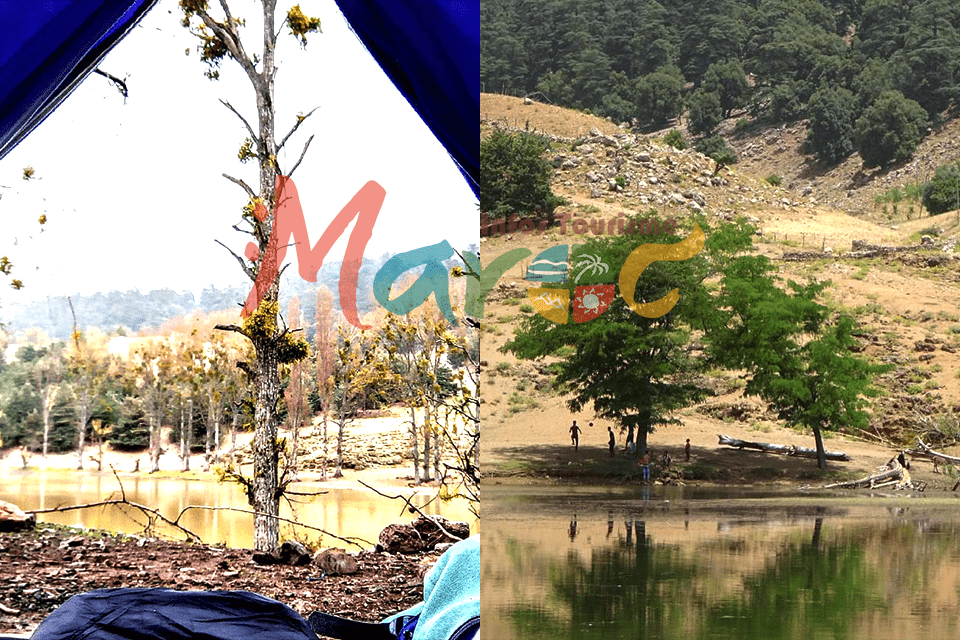 The Ouiouane is a lake located in the province of Khenifra in Morocco, 34km from M'rirt on the road to Ain Leuh at an altitude of 1,600m in the Middle Atlas. It is a man-made lake, fed by nearby springs.
This lake is located at an altitude of 1600m and covers an area of 16 ha. 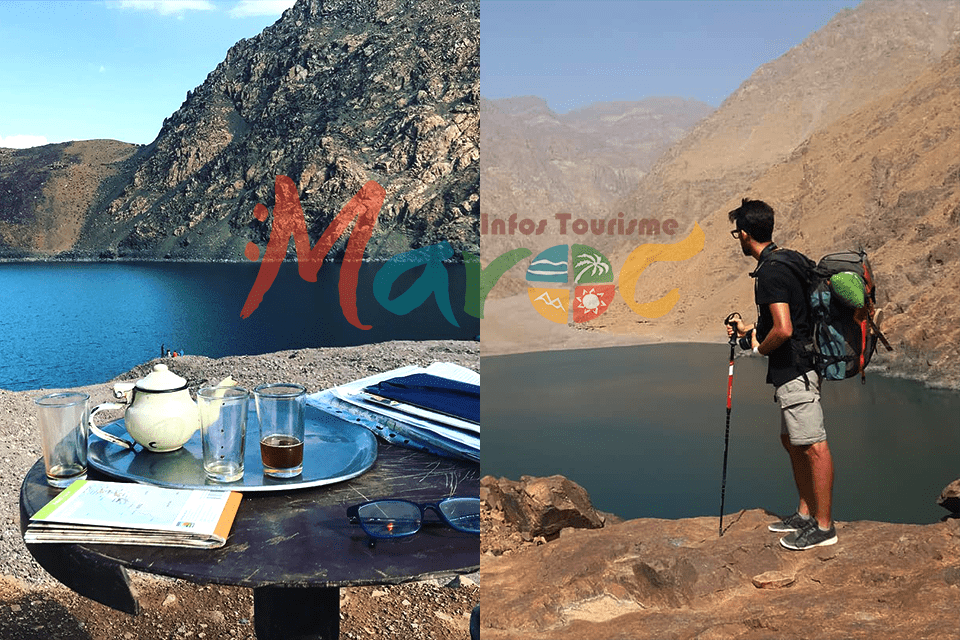 The lake of Ifni is located in the rural Commune of Toubkal in the centre of the High Atlas at the bottom of a valley framed by the peaks of Jbel Toubkal.
The lake entrances visitors with its richness and unique landscape. On its slopes as far as the eye can see, immense forests stretch which are interspersed with green valleys. 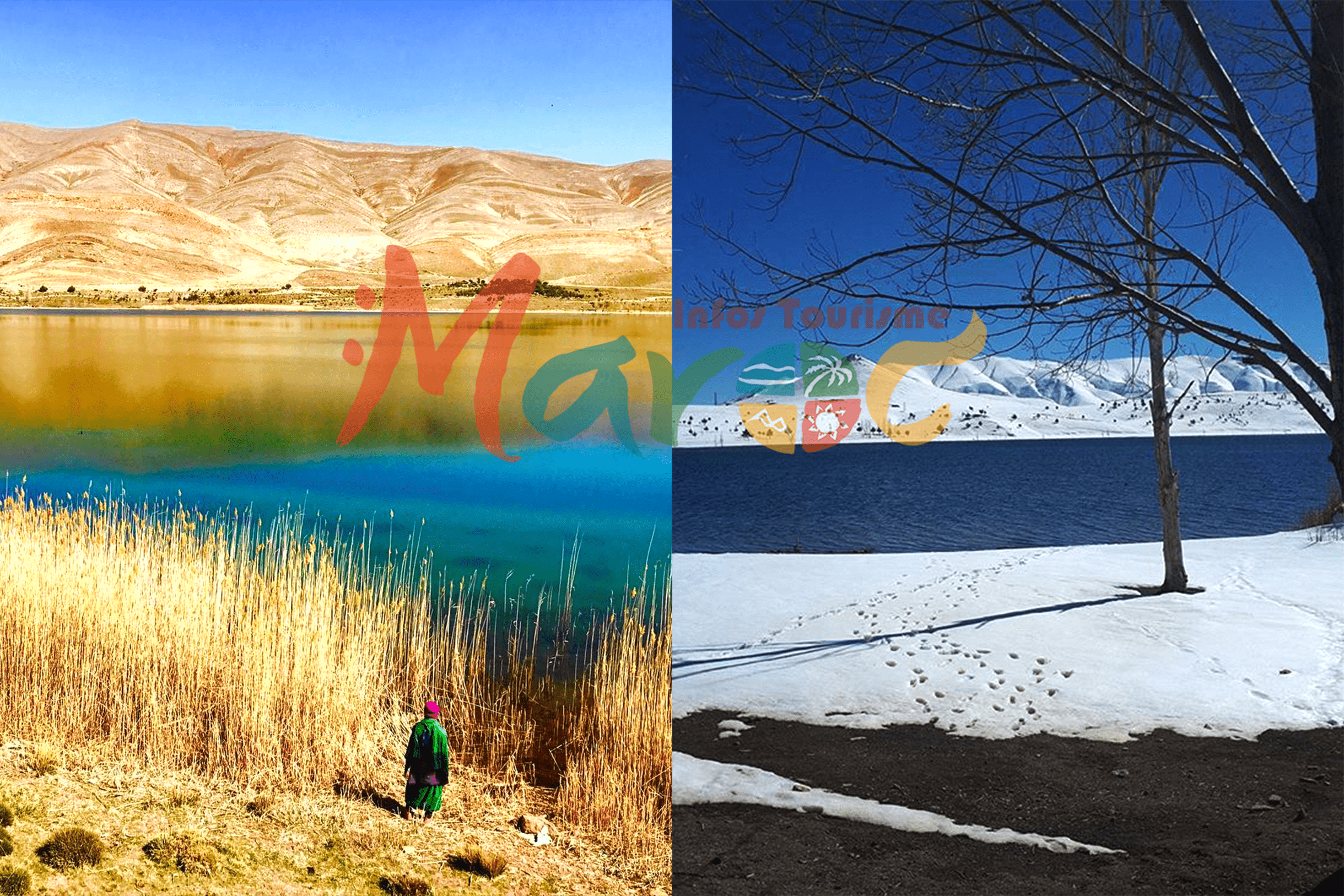 An Amazigh legend explains the origin of the lakes Isli and Tislit ("fiancé and fiancée"), tinged with romanticism and tragedy; a sort of "Romeo & Juliet" in the Moroccan style.
In fact, there are scientific explanations for the crater formed by these two bodies of water, located 10 and 4 kilometres from Imilchil in the High Atlas respectively which are 9.4 kilometres apart. 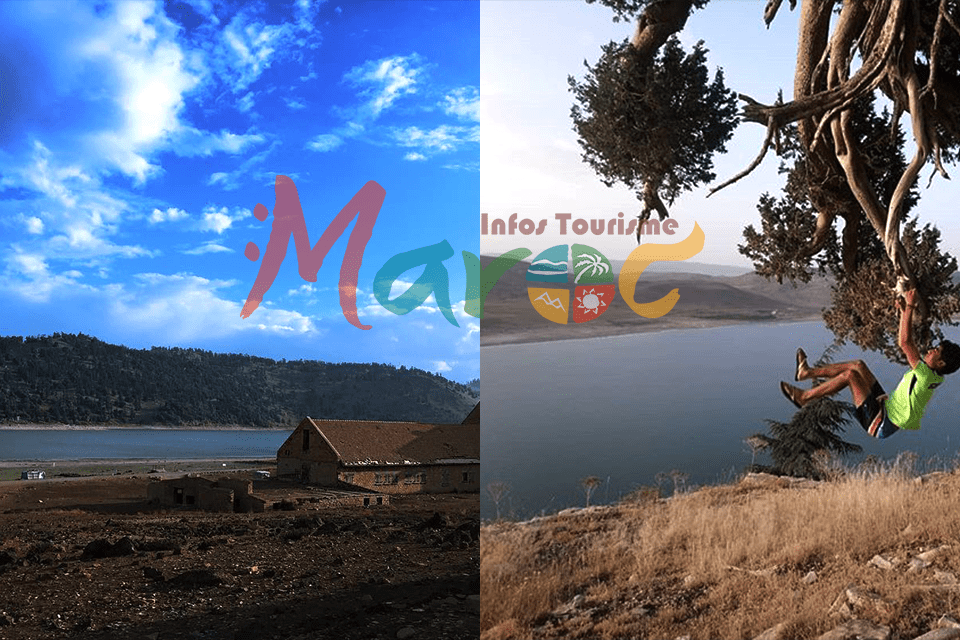 Lake Aguelmame Sidi Ali takes its name from a marabout nestled on its eastern shore. Formed by a massif of volcanic rocks in the heart of the Middle Atlas, the lake is dominated by the edge of the Jbel Sidi Ali which culminates at 2,395m (Jbel Bouyizane). This place is extremely beautiful.